My name is Marcel Koken. I’m a dutch citizen, but I have been working in France since 1994 for the National Center for Scientific Research – Centre National de la Recherche Scientifique (CNRS). For the last 9 years, I’ve been studying the mechanisms and functions of bioluminescence (light which is produced by a living organism) and biofluorescence. 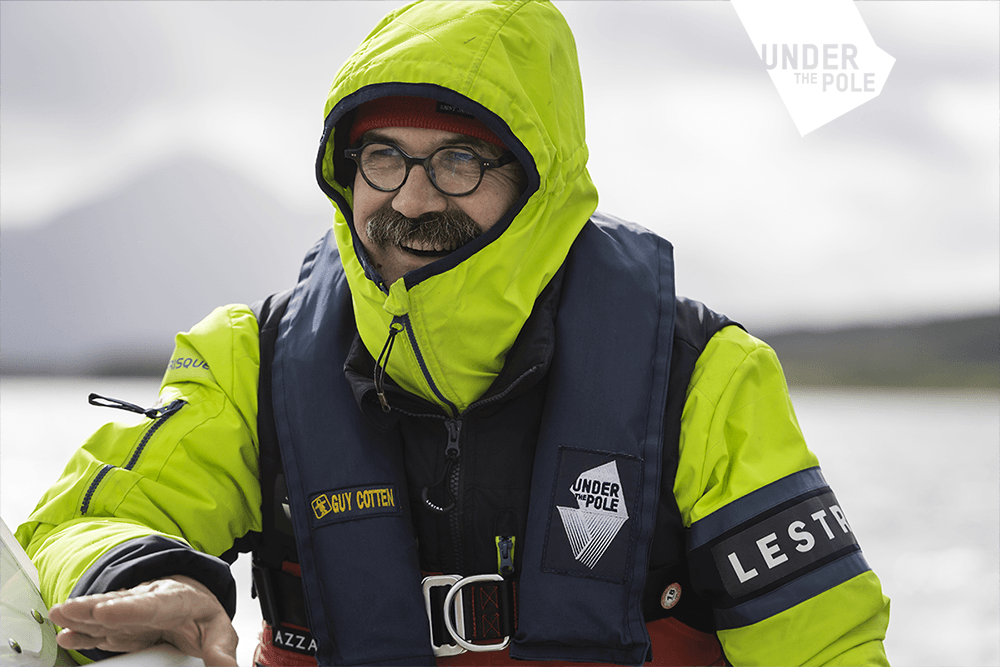 Marcel is on the deck of ship WHY, in Alaska – © Franck Gazzola – Under The Pole

Why did you decide to work on bioluminescence and natural fluorescence?

For 20 years, I was focused on fundamental research, including interactions between proteins. After a while, I wanted to broaden my scope and do some research with more concrete applications. That’s how I came to work on fluorescent protein which have revolutionised medical imagery.

At that time, only the Green Fluorescent Protein (GFP) had been discovered on a jelly fish from the North Pacific ocean and which only fluoresced in green, yellow and blue.

Through my research work, I randomly found this publication from 1984 which described a fish living at greater depths which could produce a red light. I jumped onboard, it was the N/O Thalassa of IFREMER boat and managed to find this fish way past 1000 meter depth. I managed to isolate this protein and study it in more details.

I am very interested in the reasons that lie behind the production of light by animals. The concrete use of these proteins is what usually allow us to finance our research. However, what I am passionate about is understanding why animals use fluorescence. I want to know why they shine! For instance, I work on a fluorescent worm which seems to create some light as a defence mechanism against predators.

Why would we need different coloured proteins?

Well, simply to study the simultaneous journey followed by the different proteins being identifiable by their colours, so that we can understand how they move inside the cells or how they interact with each other. The red colour also has another advantage: everyone is looking for it since around the 700 nanometers mark (deep red) human tissues become translucent, which means that we could see the inside our body, from the outside. 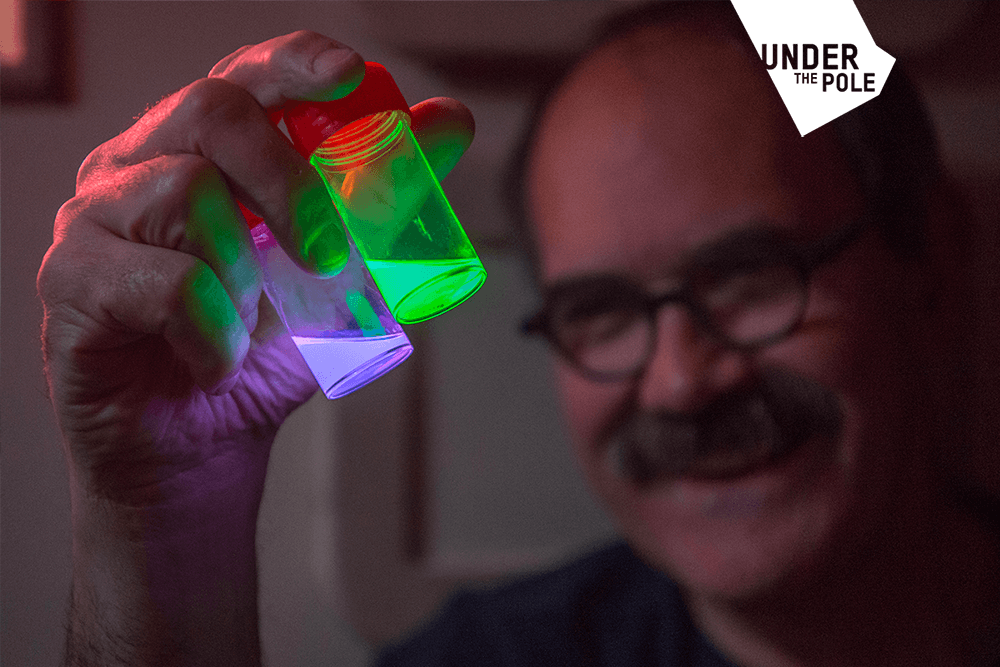 Fluorescent proteins have different colors – © Gaël Lagarrigue – Under The Pole

What can Under The Pole bring to the table for your research that you cannot find elsewhere?

Under The Pole goes to places in the globe that hardly any scientific vessel would go. And even if a research project would be granted with budgets, scientific divers would not go deeper than 50 meters. Only robots would. The zone between 50 and 150m, called the « Twilight Zone » is rarely sampled as robots cannot properly sample or cannot sample at all. This is why when Under The Pole offered me to embark with them, I could not refuse this opportunity to collect such rare samples.

What do you expect to find under theses latitudes ?

The Arctic is an interesting place as there is no light for a major part of the year. The biological cycles are very different from most other regions in the world. The polar night, from November to March, plunge all living creatures in darkness for almost half  the year. But in reality, they spend almost 9 months in the dark and then live 3 months in continuous light. We can therefore assume that those months of darkness would be ideal for bioluminescence, since the living organisms do need darkness to be seen shining. However, it’s quite the opposite for natural fluorescence which is dependant on sunlight. The sun being absent for so long, we can presume that it would be hard to find fluorescence in this part of the world. We want to understand how this polar world shine underwater and hopefully find some new fluorescent and luminescent proteins. To my knowledge, we are the very first ones to look for this in the Arctic, which is why we are very hopeful!

Have you already had some interesting results?

The first results indeed indicate that there seems to be little fluorescence in these cold waters. That being said, the team has managed to find a chiton (small shellfish) which produces an interesting red light, or an urchin with green pods and a shrimp with green eyes as well. For now, those are only observations and we can’t be certain of the results just yet. We freeze all promising samples at -80ºC, and we will figure out their chemical composition where we are back in France. 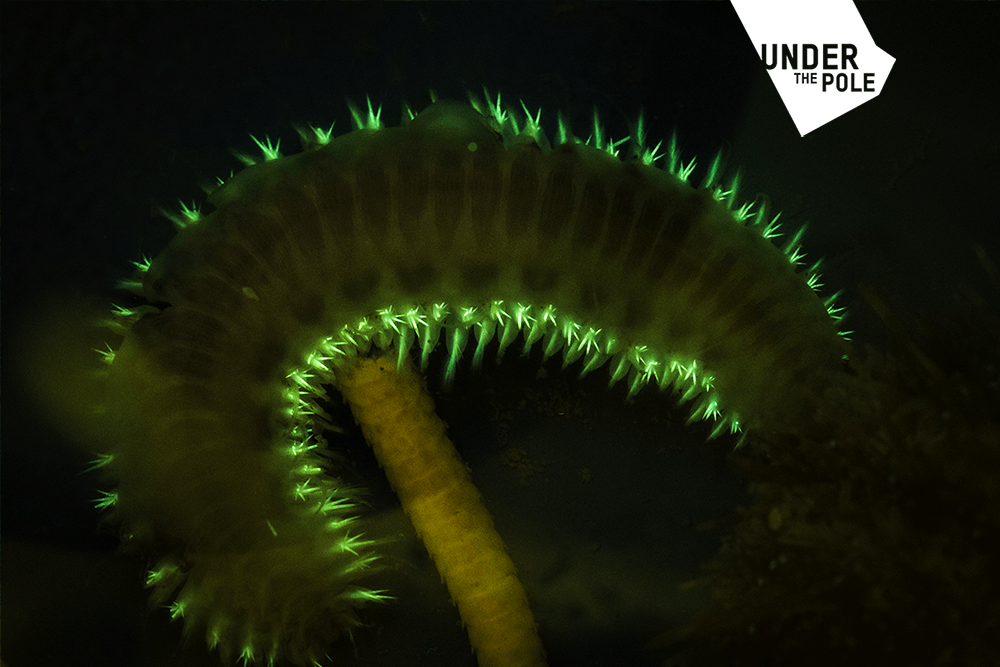 © Marcel Koken – Under The Pole

Working on bioluminescence was tricky as there was no darkness until we got to the second part of the expedition. However, during my later sailing shifts, all I could see in the water was a light show in the water, even witnessing real flashes of light under or behind the boat, which clearly proved that bioluminescence is indeed present! 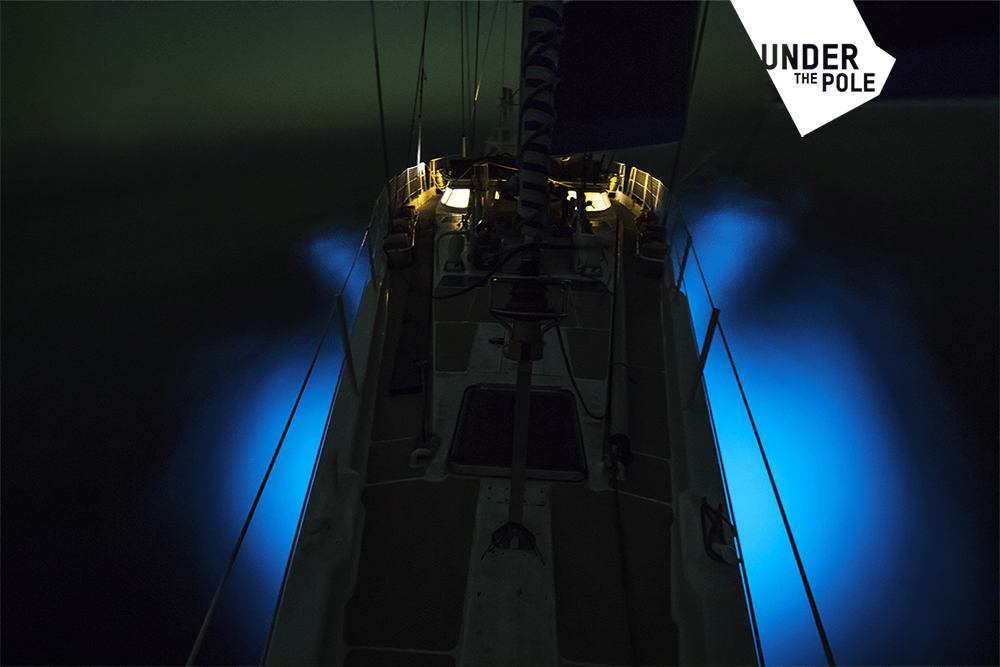 What is the protocol to yield those samples? Can you describe what a scientific dive around biofluoresence would look like?

The divers are equipped with Ultra Violet lights (405nm) and deep Blue lights (450nm), as well as filters over their diving masks to detect fluorescence. They also carry some nets and sample tubes to bring all the samples back to the surface. Underwater, their mission is to sample every living organism that seem to be shining. But sometimes, the reality can be deceiving! For instance, during the last dive, the divers brought back a shrimp with fluorescent eyes, but this could only be a consequence of the light reflection, just like we can sometimes observe on a cat. This is why we need to verify these findings once back on the boat, using a very light sensitive camera. 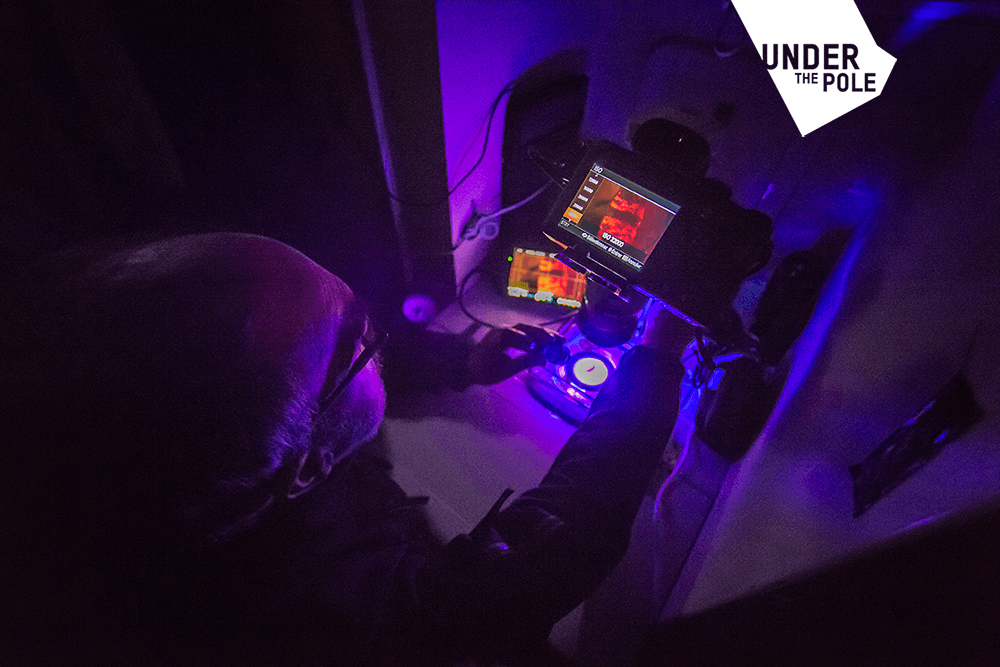 Is there a memorable moment on the boat that you will remember ?

Things were a lot harder than I initially imagined, like not having a small private space that doesn’t rock, to be able to quietly work! But I’ve had a lot good moments onboard…without forgetting the incredible sight of the northern light in the middle of my night sailing shift. My best memory is certainly the crossing of the Baffin Sea, between Greenland and Canada. During the shift change, we took over and started zigzagging between the ice in a thick fog. After three hours of difficult sailing in these conditions…we made it: the ice opened up, the fog cleared up and the sun ended up shining so hard that we could feel the warmth on our skin. Minutes later, we could then see the Canadian mountains in the distance! But within 5 minutes the temperature dropped down to -10ºC and the wind went from 0 to 40 knots…so we shot our way through the ice towards the Canadian shores.

And what about a lowlight, so that you don’t forget about it?

Diving in these cold waters is always tough! My drysuit was dry, but It was so tight that I struggled to breath! And the cold, my god! The logistic and preparation associated with a dive of this nature is never a fun moment, but paradoxically we do it because we like it…and that’s what makes it so exceptional!