I did my first dive in Guadeloupe with my Uncle when I was 7, and since I lived all my childhood in the Reunion island, I had the opportunity to spend a lot of time in the lagoon and on the reef. With my mask and my fins, my brothers and I would only come back to shore when being close to hypothermia! 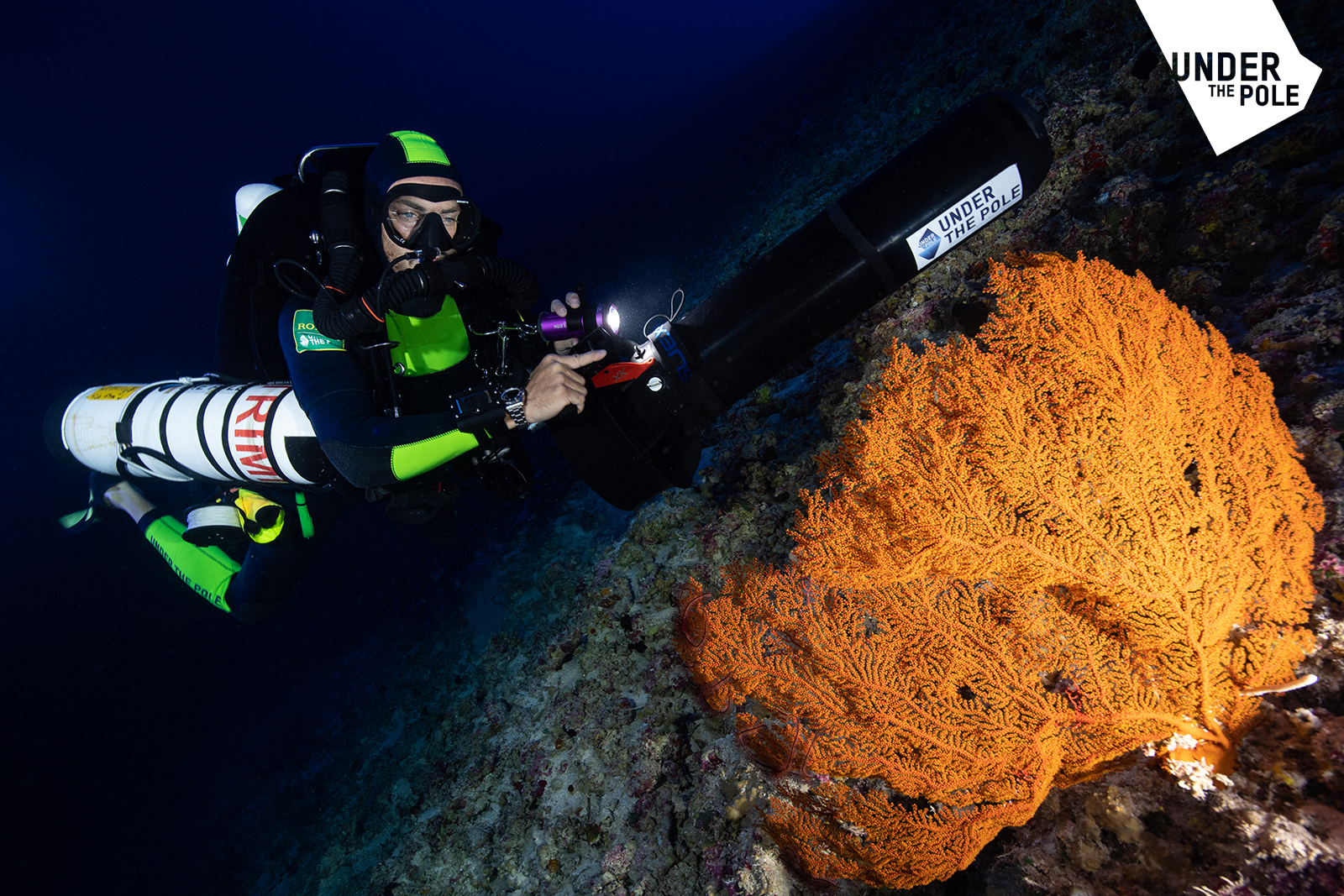 Observing marine life, trying to find all living things that are hiding underwater, trying to figure out some incredible mysteries like the ‘’zourites’’ (octopus) which manage to change shape and colour in a split second…have been my main activities as a kid. I passed my A-Level with a science major, and that led me to doing my studies in marine biology and a Masters degree in Research at the Oceanology Center in Marseille, France. But I realised that I wasn’t made for pure research, which would have meant too much lab and computer work, I decided to enrol for a Professional Masters degree in Ecological Engineering and Biodiversity Management in Montpellier, France. I did my work placement at Andromède Océanologie, where I discovered the work of a Research Bureau as well as rebreather diving. After completing my Sports Instructor National Diploma in Montpellier, I became the Manager of Laurent Ballesta’s diving school, which main activity was focused around the training and transmission of knowledge in marine biology. Logically, the next step for me was to become an instructor on rebreather. 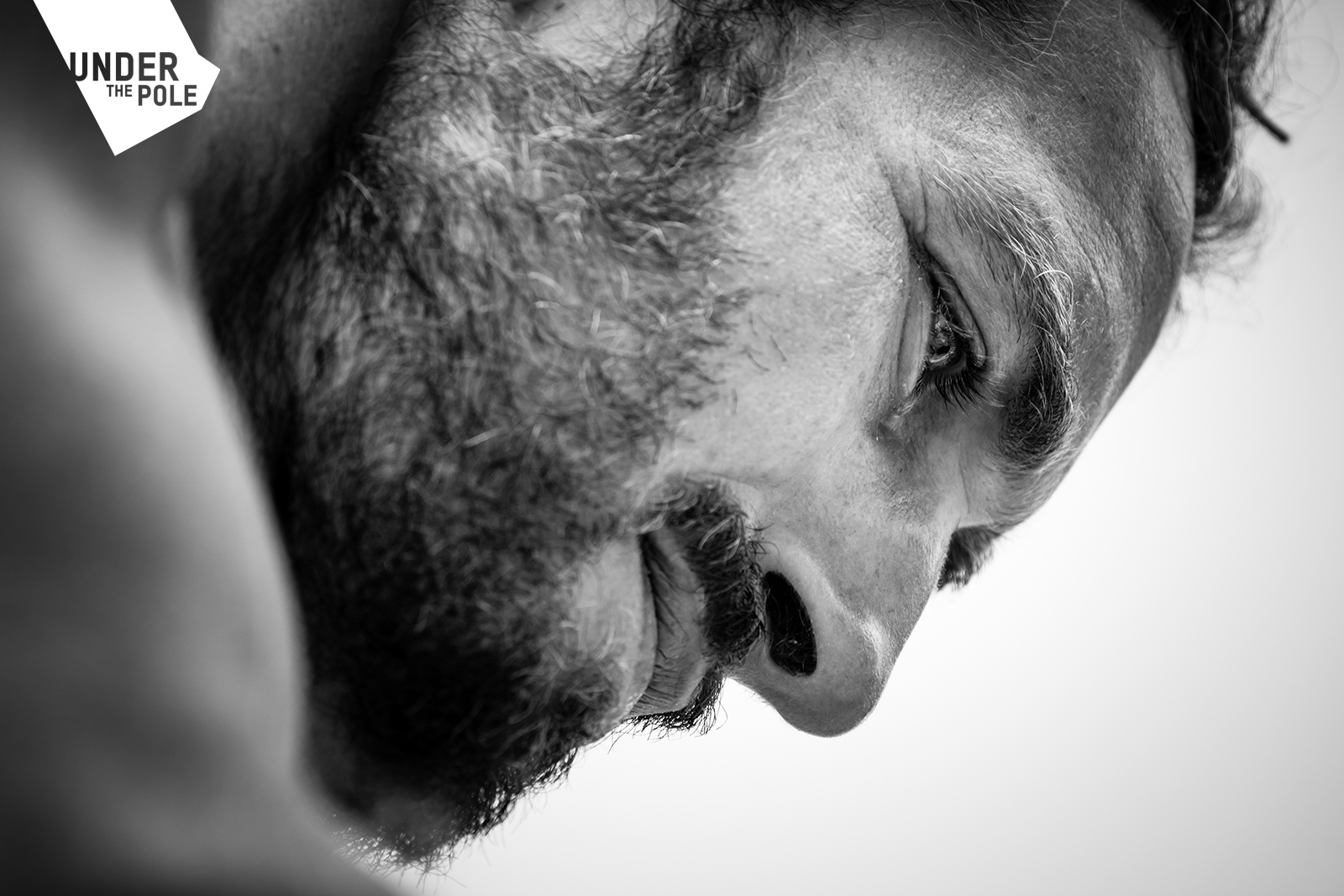 The first time I met Ghislain and Manue was at that time, on a boat on the Mediterranean sea, about 10 years ago. A boat was certainly the best platform for this couple of explorers, passionate about diving, travels and sailing…We were out at sea, close to Antibes, France, for a scientific dive campaign, and the idea was to share our experience and techniques on some of the best spots of this coast-line.

This program was already one to make a lot of deep divers envious, but this was nothing compared to what was coming…. 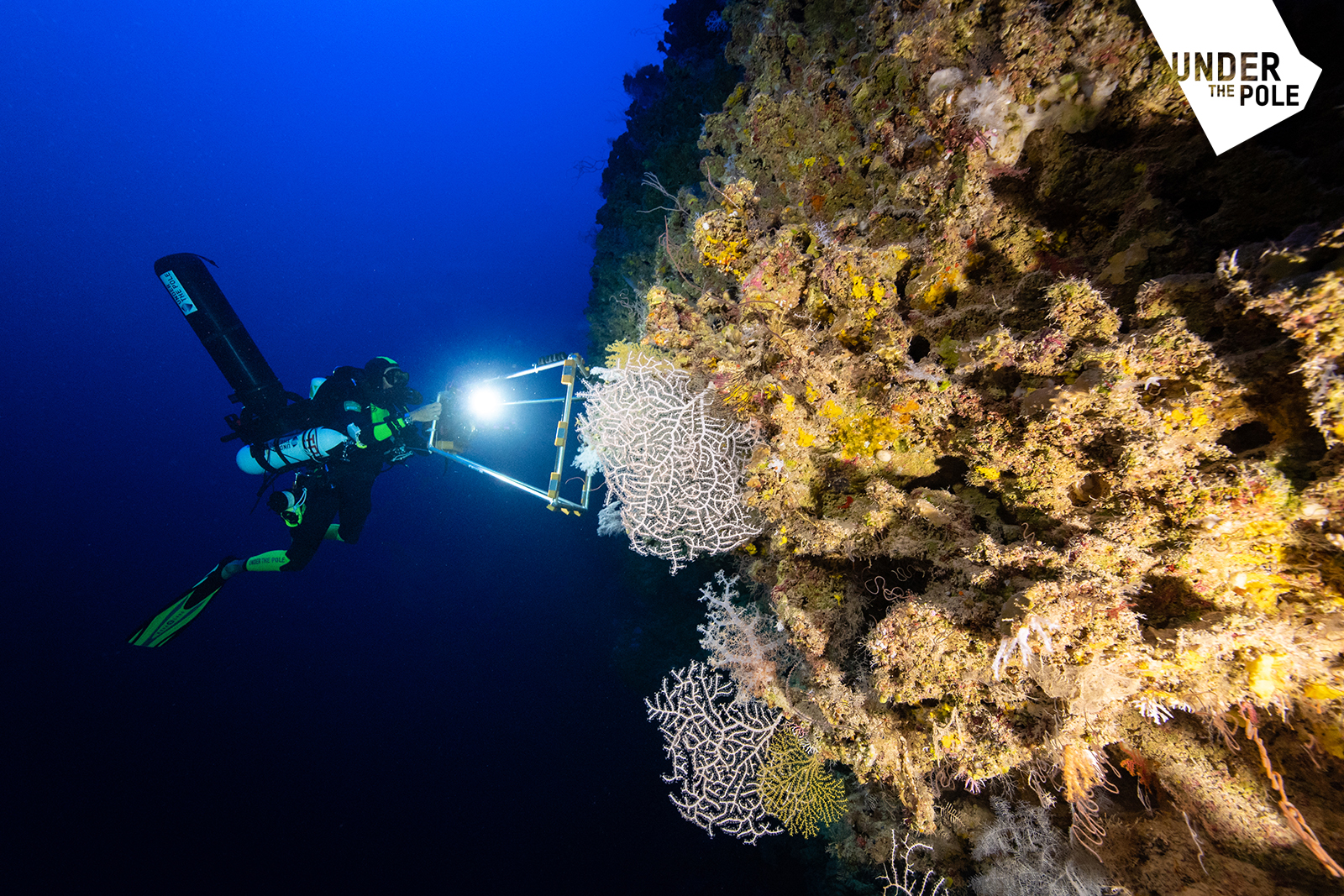 All these years, I continued my training adding new diplomas to my CV, became a CCR hypoxic trimix diver and then tech dive instructor too (trimix, rebreather, etc) with the IANTD, one of the most demanding Agencies. During my 3 years based out of La Ciotat, France, I taught and I was also involved in different scientific missions in the Indian ocean and Indonesia more specifically.

I was following the work of Under The Pole, but with my background of warm water diver, I must say I was still a bit cold feet to join…but Ghislain called me to be part of the expedition during the Polynesian leg of the expedition, to be his dive buddy and diving co-Director.

I never had the opportunity to dove in the Pacific and as for most divers this destination was extremely attractive. The perspective of incredible explorations would have been enough to convince me, but the quality of the scientific program made it a no brainer. Beyond the excitement of being part of some ‘’world’s firsts’’ in places & depths that have never been dived before, Ghislain knew how to convince me with the itinerary, the quality of the scientific team. For instance, the presence of M. Michel Pichon – world renowned specialists of mesophotic corals and an ultimate source of knowledge – who has spent over 50 years all around the globe with the biggest names of ocean exploration!

Finally, the production of a couple of documentary movies was another attracting factor for me in joining this expedition. The video team, whom I had already met at the Paris Diving Show or that had met in the last few years, is composed of highly competent individuals, open-minded and generous.

Once I made the call, I flew to Tahiti, just before the team from Brittany arrived and we kicked off with a series of dive training with Aldo Ferrucci. This was the time of the year where you can make great encounters underwater in the Society Islands, with humpback whales, pilot whales, reef sharks or even some great hammerhead sharks ‘’Mokarran’’ like in Raiatea, at about 65m depth.

Since then, we have arrived in the Tuamotus and have done over 50 dives past the 100m mark, which represents over 150h of time spent underwater and about 5km of vertical exploration! Here, the lords of these waters are the Mokarran, the Tiger sharks, the school of Leopard or Manta rays. They want to be noticed during almost every single dive…or they simply come to patrol the area and make sure we are not going to stay too long in their backyard!

I have been for about 5 months now on the expedition and over time I got to know everyone on-bard. Every single person has got a specific role, but is also involved in all the tasks relating to the life onboard. Even if it sounds a bit cliché, the way I was welcome and the values carried by every crew member were very refreshing for me. Sharing, helping each other out, the environmental consciousness, etc are absolutely essential to me, and life ends up being really simple despite the daily workload.

We have shared some unforgettable moments in or out of the water, just by being in places that are so remote or impossible to dive the way we do that is deep and for several hours. We went as deep as 174m for the most committed dive.

This is the result of intense preparation and training to be perfectly operational at those depths. We carry with us a lot of equipment, and the key is to be efficient at the bottom as it has a direct impact on our decompression. The objective of the this dive wasn’t to get a personal record, but to assess until which depth we could find the very last mesophotic corals, which is important for the scientists to know. We brought back some samples taken at 165m and 162m and are now awaiting for their feedback. Even though we went down three times deeper as the maximum authorised depth in France on open-circuit (60m), and therefore a lot deeper than our usual working depth, we have limited our commitment to the decompression time we would normally allow ourselves when we dive down to 120m. We went deeper but for a shorter period of time, which ended up being a 4 hour dive in total. We were perfectly prepared for this dive and all went as planned. Personally, I felt an additional excitement factor, due to being exposed to the unknown, but we knew what we were doing and did it well.

Soon, I will be heading home in Sydney to be with my loved one. I’ll have my head full of memories and ready for more. This first chapter with Under The Pole is coming to an end, but I am hopeful that it’s not the last one… 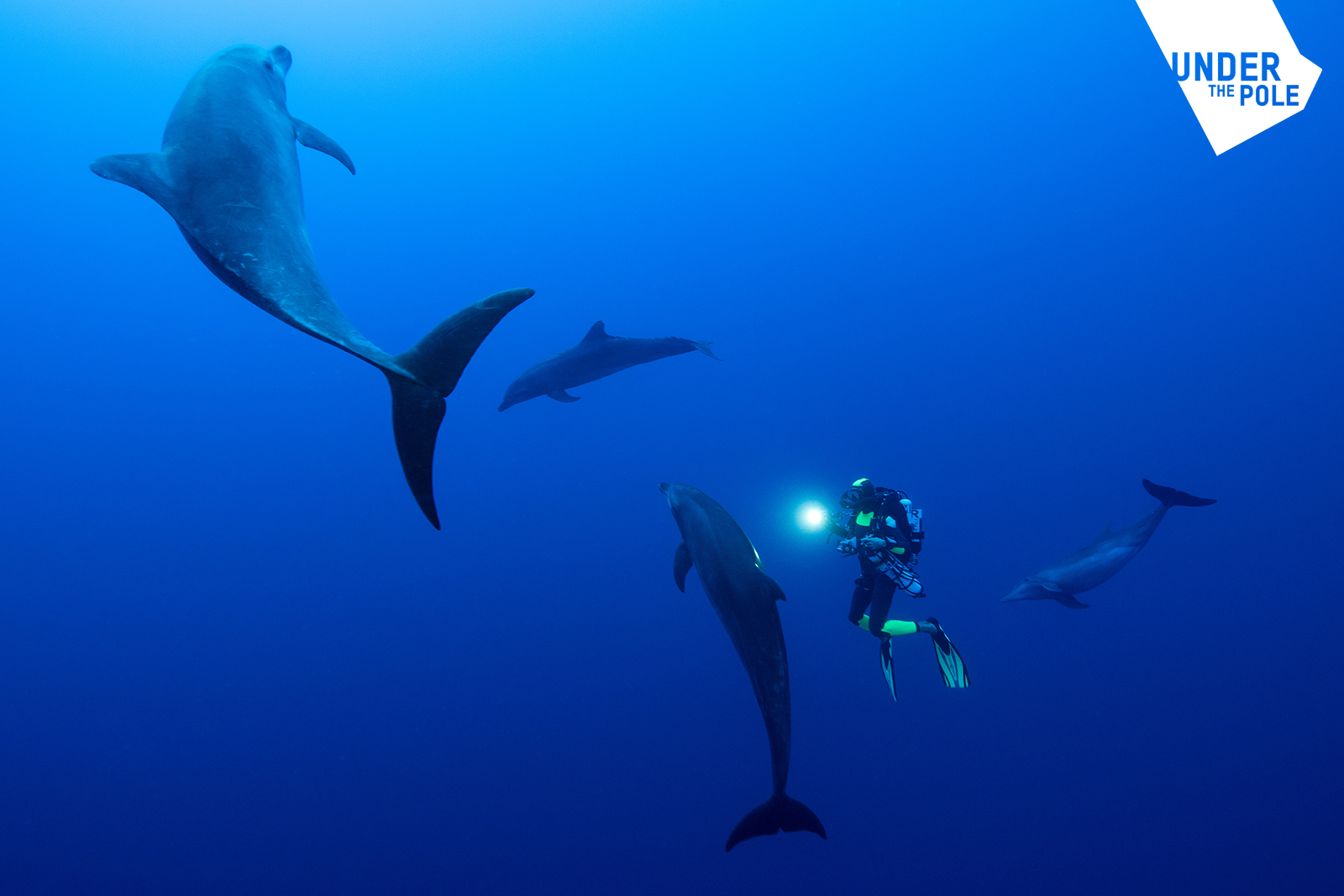