At 6 m depth, my computer displays 72 minutes before returning to the surface. I am coming back from 120 meters. A depth I never thought I could reach just a few months ago. I look over at Erwan for whom this is a first too. He is taking pictures of the coral colonies we have been studying for 12 months. This dive was intense from beginning to end, going down with the scooter, working deep down at 120 m in this peculiar atmosphere, the reef covered in Leptoseris coral between 80 and 90 m, the caves, the visit of an albimarginatus shark while we were packing up the sensors, and now the transparent waves we can see breaking on the reef above us. 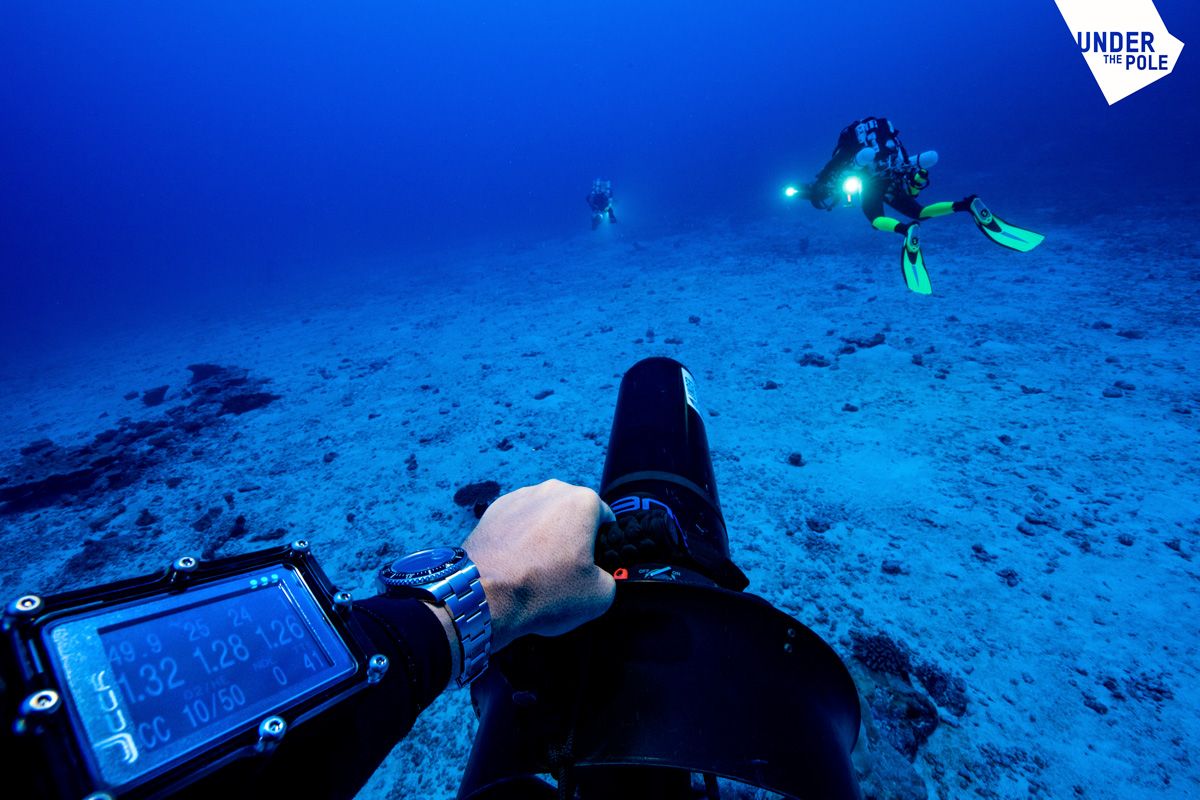 We are in Makatea and it is the last island we are studying as part of the DeepHope program. In 15 days, the team will split up for the month of July before meeting again in Moorea in a month. Some kind of nostalgia filled with happiness and pride seizes me: this study of mesophotic corals is a success. We managed to complete it and the results are already beyond expectations. The scientists are now sitting with the largest collection of deep corals in the world, we sampled the deepest coral ever seen, as well as identified new species in Polynesia and for the science, but above all we now hope that all of these samples will feed the scientists with enough evidence that will help them support the ‘’refuge theory’’ which is based on the fact that the larvas of mesophotic corals can help recolonise the shallower areas of the reef which are are frontline of all the different threats. This is a real hope for the reefs that are bleaching and dying around the world, taking down with them an incredible ocean biodiversity.

A long period of lab work is now starting to analyse and deal with all the gathered during the expedition: analyse the 1000s of photo-quadrat images, the DNA results of the samples collected, the acoustic files recorded undewater, as well as all the analysis of the water composition in the water column for each diving site. Our scientists have enough work on their plate for a few years!

Every member of the expedition is part of the succes of this mission.

As always, I tend to realise the magnitude of what we’ve accomplished. Living and working, 12 of us, sometimes 15 onboard the WHY, doing deep dives daily and rigorous scientific work, going from island to island, from dive site to dive site, refilling the tanks, doing all the necessary gas mixes, as well as managing the maintenance and the reparations, collecting samples under the rough swell or under the harsh sun, post-processing all the photos and video files, dealing with the production of our documentary, doing the dishes, and of course doing some long haul sailing in too-calm or too-rough weather…but above all maintaining the harmony onboard whilst everyone has been working so hard for so long. The bodies and minds do get really tired after a while. Thank God for the traditional evening drink and the occasional party which help to keep this friendly vibe and fuels the stories – we now have quite a few – to be told. Even Tom and Robin (respectively 3 and 7) have seen through our strategy and now want to be a part of it. I smile with my mouthpiece in my teeth thinking of my kids who grew up in the Arctic and who recently discovered the joy of warm waters. Robin swims and jump in the water like a fish, and I managed to stick up to my promise made 3 years ago to take him swimming with the big whales. Tom jumps like a madman on the WHY, he’s fearless and can be as funny as terrible. With his lisp, he tells everyone that ‘’he is a surfer, but above all a sportsman!’’. Even though it’s not always fun for them to live in such a confined space to play, surrounded with tons of equipment, the team members naturally became family members for the kids, giving them cuddles, reading them stories, doing some drawings or colouringor, spreading butter on their morning toast or even putting them in the corner sometimes. Most of our team members are fairly young and don’t have kids, but even if they get annoyed sometimes when the kids get too naughty, their patience and care are – almost – limitless. Camille, their 26 year-old nanny, who arrived in Polynesia at the same time as I did 16 months ago has played a major role in finding this fine balance between our professional and personal life. She has also changed so much since then ! Before embarking, she had never lived or sailed on a boat at sea. Not only did she adapt to our lifestyle, but she has become an incredible team mate on the field, taking the kids to some motu on a rib boat, jumping off the boat with Tom and Robin, taking shifts with me in regards to the home-schooling of Robin, cooking some nice meals for all of us, and managing her sea-sickness during the long crossings…She even successfully passed her beginner’s diving licence in the middle of the dolphins and the sharks in Rangiroa… 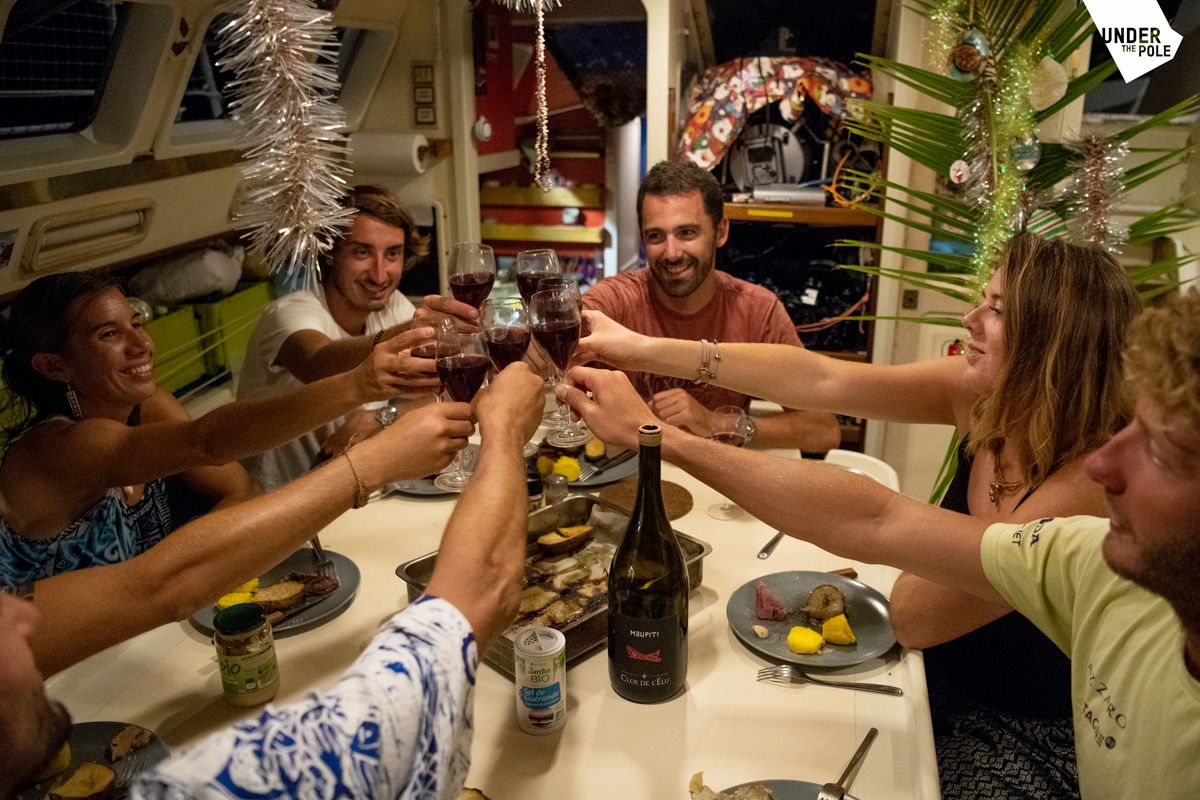 Every single person contributed to the success of this mission. Onboard, we’re not just divers, mechanics or photographer, we are a ‘’team mate’’. This is representative of the spirit that Ghislain and I want this team to have. We don’t want to frame people in a specialty box. It’s quite the opposite: our success will only be enabled if everyone is capable of listening and understanding everyone else, or take-over when someone is not in a position to fulfil his/her duties. Even if Ghislain and I are the incarnation of this project, every member took ownership of it to make it successful. DeepHope has certainly been the largest and most demanding scientific program we’ve ever worked on since Under The Pole was born. Beyond the challenges relating to diving, we have come to realise the actual stakes of this program, and the hope it carries for the coral reefs. The way we look at these critical ecosystems has changed and it was passionating. We will keep working on the reef during the coming months. Something tells me that we will be coming back to them from now on. Just like the strong attraction we’ve felt with the polar regions, the survey of the fragile balance of the reefs is fascinating and there is still so much to be discovered in the mesophotic area.

Ending a mission is necessary to be able to start a new one.

I’m looking at my dive computer. Only a few more minutes of decompression. I milk every second of these last minutes in-between two worlds. When I’ll be popping my head at the surface, I’ll see Robin or Tom who will ask me a question just like I’m back from doing the groceries, I’ll see the smiles of the ones who stayed at the surface and will ask me to describe this dive to them, I’ll see Michel who will be telling me that the yield was great and I will ask him back if we’ve discovered anything new…I know I will miss this. But I’ve come to know that it is not the end. Ending a mission is necessary to be able to start a new one. And in just a few days, there will be more people in Moorea than we’ve ever had to kick off the Capsule programme.