Crossed views of Ghislain and Armand

From Sitak to Papeete, via Hawaii.

Armand, this is your first time sailing the WHY, is it an easy boat to get used to?

Indeed. Even if I’ve often seen the WHY moored in Concarneau, I had never sailed on it before the departure from Sitka.

I’m used to lighter boats, so the size of the load is quite something for me. Are we really going to cross the Pacific with a RHIB on the deck? If I’m oblivious to all the different crates and barrels spread around the deck, I’m quite intrigued by the elegance of this ship. The rigging is quite unusual with the two identical masts and the two large genoas.

I was also quite surprised by the fact that this is a centerboarder with two daggers, one behind the other, which can totally be retracted. How will this boat behave in the big offshore swell? Will it be easy to tune and manoeuver?

I got my answers to all those questions after a few days of sailing in the North Pacific.

The wide range of weather conditions that we had to deal with in the first few days forced us to go through a full review of the boat’s capabilities. All sails up to start with, then we down-sailed gradually to get to the very minimum whilst coping with the first low pressure system in the Gulf of Alaska. The first sensations are felt right there, and despite some digestive complications for all the people that had been on land for too long, I started to bond with the WHY and the crew for the three following weeks.

My take on the WHY is that it is a reliable tank which will take us anywhere. It is exactly the right boat to face an icy cold ocean. Pfew!
I started to feel confident in the power potential of this 45 tons schooner.

Manœuvres are smooth and well executed, which is testament to experience of the crew onboard who have spent endless hours to prepare the boat and lay-out the deck of this expedition boat. The cockpit is well protected from the weather, allowing the permanent watch around the clock. Shelter from the rain, it is possible to witness the tons of water which sweep the deck of the boat after every wave, and which would end up in the ocean if they weren’t tightly attached to the deck.

The crew slowly found their mark, and got used to the weird rythme of the shifts. Every single person is on the roster and is responsible of the smooth sailing of the ship. Every 6 hours, you have to gear up warmly and spend 2 hours on the deck to watch for potential collisions and sudden weather changes.

Even if the shifts are done by one person at a time, the rest of the crew is never far and always ready to jump in their boots to get out on the deck or help for a manoeuvre. 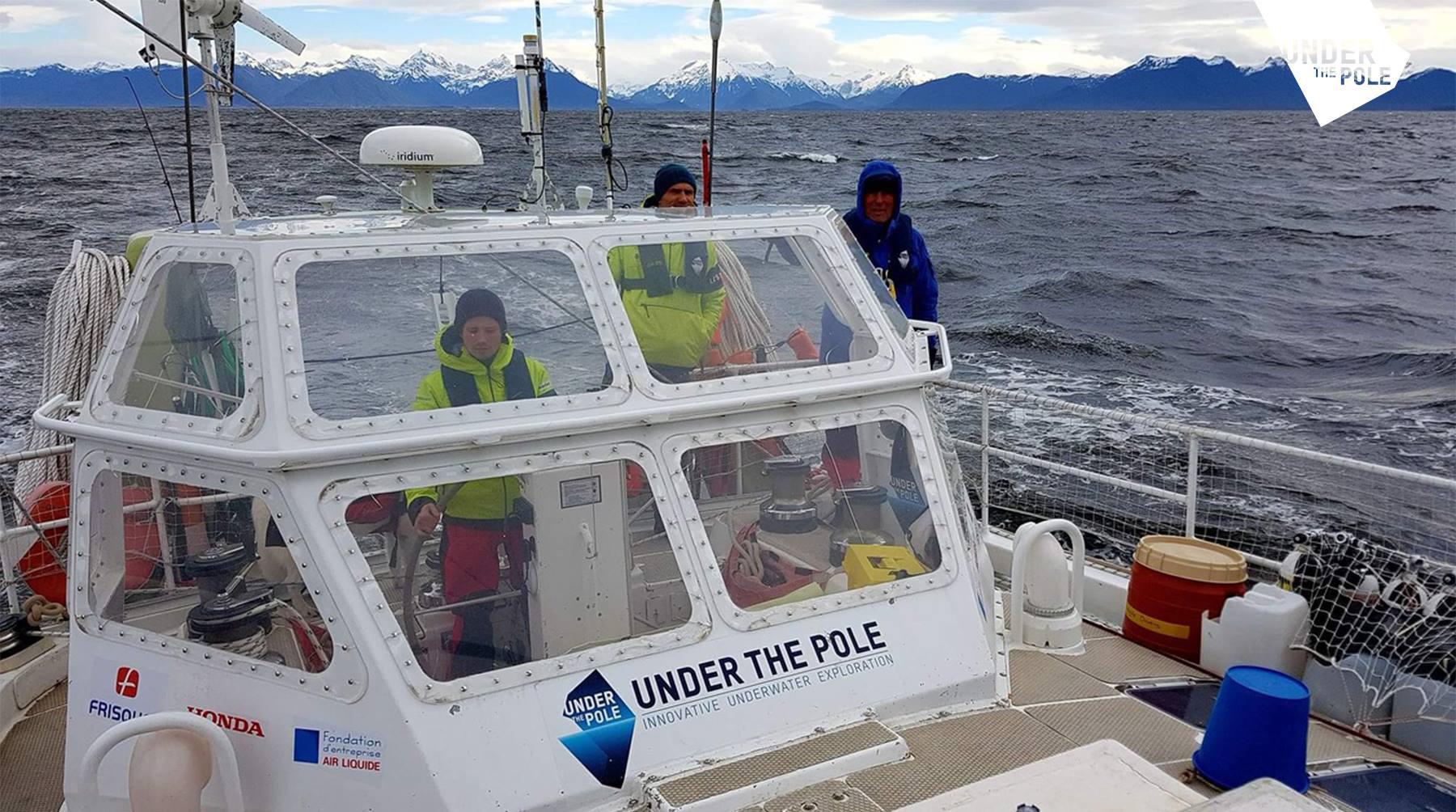 Armand, how do you plan for a fortnight sailing under these latitudes? How do you choose the best route? What are the conditions like in the North Pacific in April?

Well, it’s going to be cold! Not the Winter kind of cold, but cold nevertheless.
What will be tricky are the storms with howling winds and rogue waves.

To cross from Alaska to Hawaii at this time of the year, you have to study the weather closely. When will be the best time to depart? Is stopping on the West coast of the US a good option? About 1 year prior to the departure, I ran a few simulations of the possible routes for the WHY, using some historical weather data of the last 10 years.

We concluded that we could depart from Sitka early April, which would end up being an 18 day crossing to Hawaii.

The performances of the WHY under the sails or with engine power are a good enough reason to try to stick to direct routes and make the most of the changing conditions: a high pressure system means that we can make the most of the engine, or use the lows to power the sails. In the later situation, the idea is to come to the right angle with the cold from in order to avoid the worst point of sailing in rough seas: Dans ce dernier cas il convient de se placer habillement par rapport au front froid de la dépression pour ainsi éviter l’allure tant redoutée dans la mer formée: to sail close-hauled.

This is unfortunately how we had to sail for the first half of our crossing to Hawaii. After postponing our departure by 24 hours to let a first low pass by, we decide to sail away anyway, even though we knew we’d had to face a couple of really active low pressure systems during the first week. We left Sitka and took a route much more West than usual. The goal was to go past the centre of the first low and to be South enough when the second low would reach us. 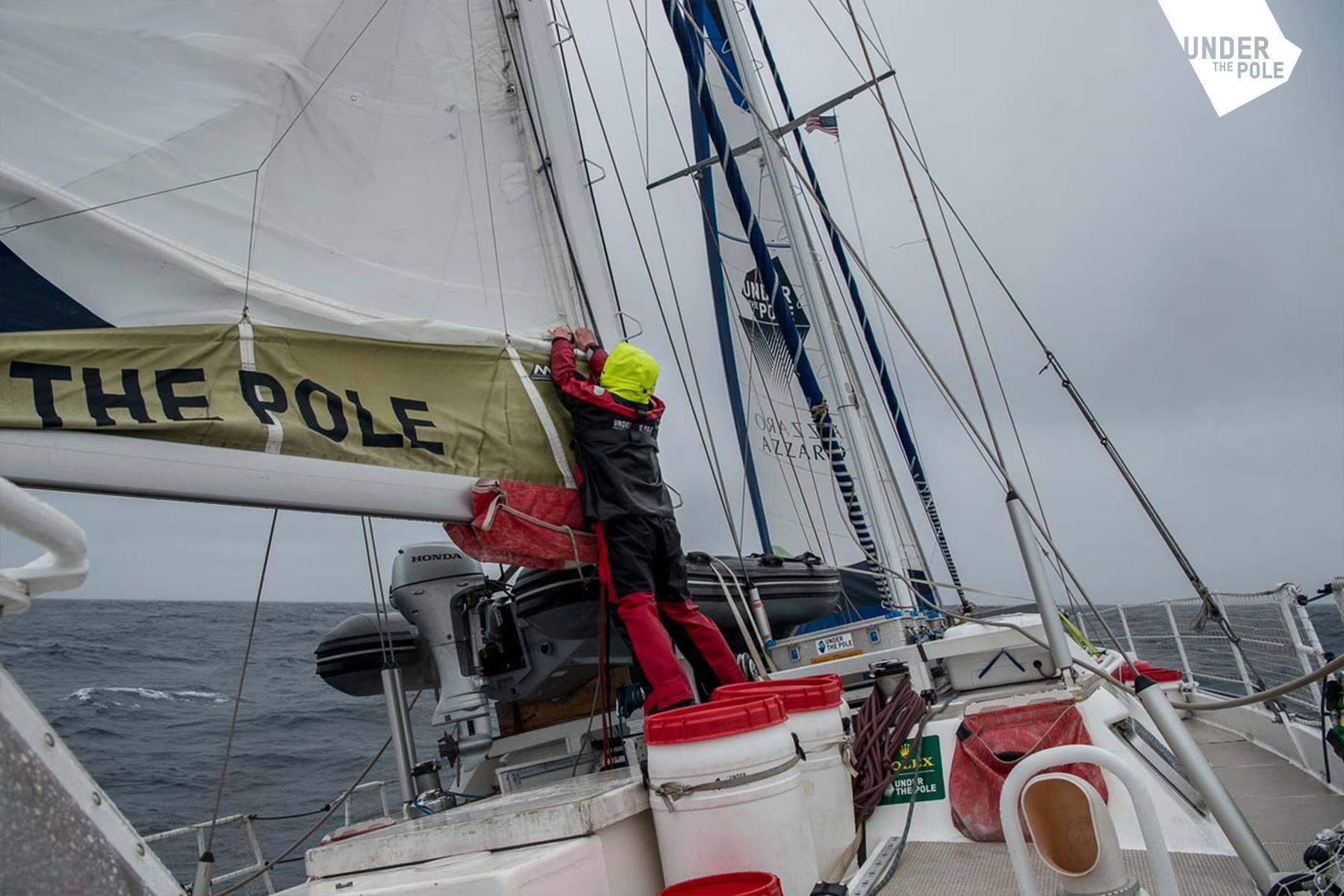 Once at sea, the satellite connexion allows us to update weather maps via the SQUID software and therefore adjust our strategy and our route.
But as nothing happens as you expect when you sail, we have read up to 72 knots on the screens, whilst only 45 knots were forecasted. Only albatros seem to feel good and gracious in this kind of weather. They stroke the surface of the water, or the tip of those 8m icy cold waves.
The WHY may not be as gracious but has this incredible capacity to gently cope with every wave. The team is in control of the situation, and made it through the two storms without a scratch. 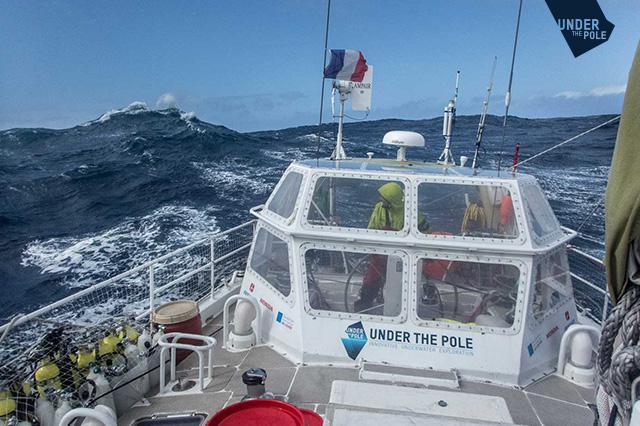 The WHY through the harbour. © Gaël Lagarrigue / Under The Pole

Ghislain, can you introduce the team onboard to do this crossing from Hawaii-Papeete, how the sailing is organized and who does what? Who sails the WHY?

For this crossing between Hawaii to Papeete, we are 4 onboard, plus our dog Kayak. Armand is supporting me as the co-skipper, which is quite natural due to his experience in sailing, a passion of his that is similar to my passion for diving.

Armand is good at sharing tips and technics. We learn from him every day in order to better tune the sails and make the WHY more balanced, faster and comfortable at sea. Even if Armand has always sailed for his own pleasure, he has participated in 4 sailing Tour de France, and has also had gained a lot of experience on the Mini-6.50 Tour (offshore racing on 6.5m long boats) across the Atlantic. He’s an engineer specialised in naval architecture, and has worked for some of the best racing teams (lately with Gitana), and he has sailed incredible boats like the Imoca (VendéeGlobe) or some of the largest multihull boats in the world.

We also have Gaël who does his share of shifts, but he is responsible for the technical maintenance of the WHY. Like me, he is passionate about photography and most of the shots that we are publishing from this crossing have been shot by him.

Last but not least, there is Alexis – the youngest team member with already a long experience on the WHY, as he was already present during UTPII – His role is to film all the key moments of the sailing so that we can share them during the month episodes of the webdoc.
Kayak is the most worthy of us all. He’s a polar hero since the day he survived the pole. He’s even been nick-named by our Inuit friends the ‘’French Inuit Dog’’. Kayak has become a sailor in the highest latitudes as well as under the tropics. 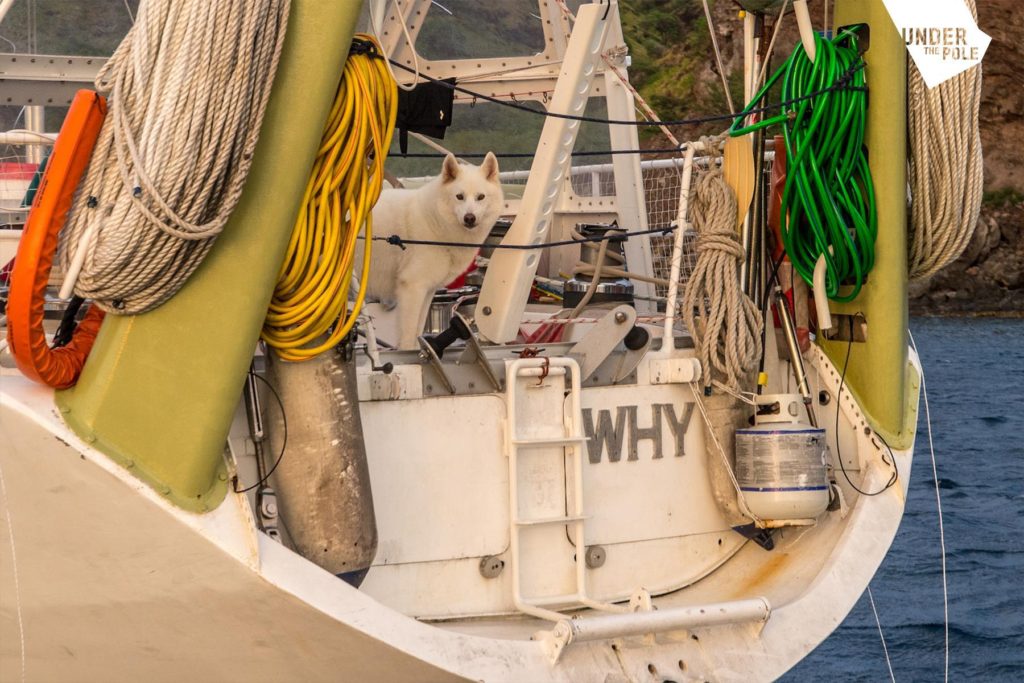 Kayak © Gaël Lagarrigue / Under The Pole

What does a typical day looks like? Is there a lot of work besides the sailing part?

The days at sea are usually the same…not. We have a shift change every 2 hours. The first week is a period of adaptation during which everyone is trying to find their mark, their rythme and their stability in this rocking boat when the weather is bad, when the winds are picking up or when the waves are roughing the around, like it was the case during this crossing from Sitka to Hawaii.

But overall, we try to wait for our shifts in the place which is the least uncomfortable: in our bed, where we can rest or read. When the weather is more gently and the winds drop to 20 knots and the sea is flattening, life comes back onboard, just like in Spring after the Winter storms.

We cook, we get on the tools, we check, we maintain, we read, we work on our computers: Gaël edits his shots whilst Alexis is cutting the next webdoc episode and Armand is looking at the updated weather forecasts.

For my part, I ready book and user manuals (which is often required but which I hardly find the time to do), I write and spend a lot of time on the satellite phone every day with Emmanuelle or the team back in the office, in order to keep track of everything that’s happening.

Under the tropics, we tend to avoid being out on the deck between 11am and 4pm when the sun is too strong. At the end of the day, when the sun sets (around 6pm), we usually gather at the back of the boat for a drink, depending on the mood and also the levels of our inventories left onboard. 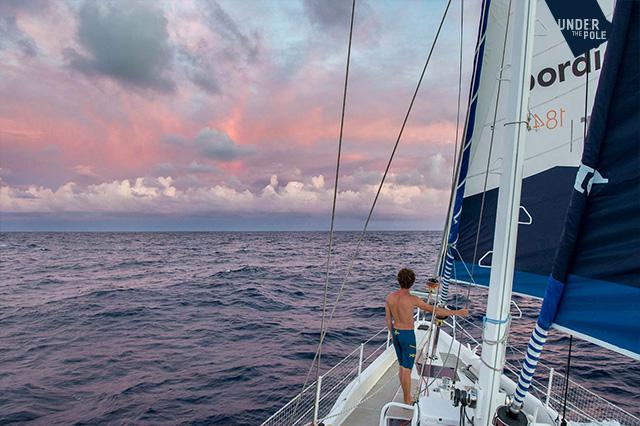 Sundowner © Gaël Lagarrigue / Under The Pole

Armand, can you describe to us the equipment used for the navigation and the gold of everyone onboard?

On long crossings, everyone play a different role and that’s for the better!

Everyone contributes to the good operation of the WHY and also cooks food, in turns. The lack of cooking skills are often offset by the goodwill and the good vibes.

That being said, every crew member is here for a reason, a special set of skills. Gaël, for instance, manages very closely the maintenance of the engine and of the network, rather than trying to fix issues. He makes sure that we all trust our dear schooner: our only shelter within 2000km!

On my side, I spend some time in front of my computer, which has navigation tools like Maxsea, Timezero to design our route, as well as Squid to download and analyse the weather daily. Once I have a strategy that has been confirmed by Ghislain, we share the plan with the team and implement this strategy.

To support these equipments, we have systems at 3 different places on the boat to give us information about the navigation parameters in real time. These screens show the trajectory of the WHY on a mapping system called NAVIONICS and also displays the other ships around us on the AIS, or via the radar, to avoid collisions.

We also keep an eye on the screens for all the variations of live weather conditions recorded at the top of the mast. Isobars atlas, whose good reading will allow the best decision on the road to take
© Gaël Lagarrigue / Under The Pole