That’s it, the WHY has reached its wintering harbour for the next four months: Sitka, Alaska. We are now in the Pacific ocean.
The Arctic Leg of Under The Pole III is over and we can modestly say that we are proud of what we’ve accomplished in the last four months.

Sailing through the northwest passage with a large team, whilst completing a scientific program requiring regular dives, producing documentary content and photographic work was a constant challenge.

Never before had the WHY been so trialled by the ice and by seas infamous to be some of the roughest on earth. But on top of the sailing itself, we’ve had to manage a program of scientific dives, shooting a full feature documentary, producing photographic work, and live onboard with a cramped team of 12 to 17, including our two kids Robin (5), and Tom (1).

What will you remember ?

Being reunited with our greenlandic friends again. Friendship doesn’t necessarily require phone or internet to survive. We met again as if we we had just left. We spent hours to talk and laugh about anything, before saying goodbye once more. This was very emotional. 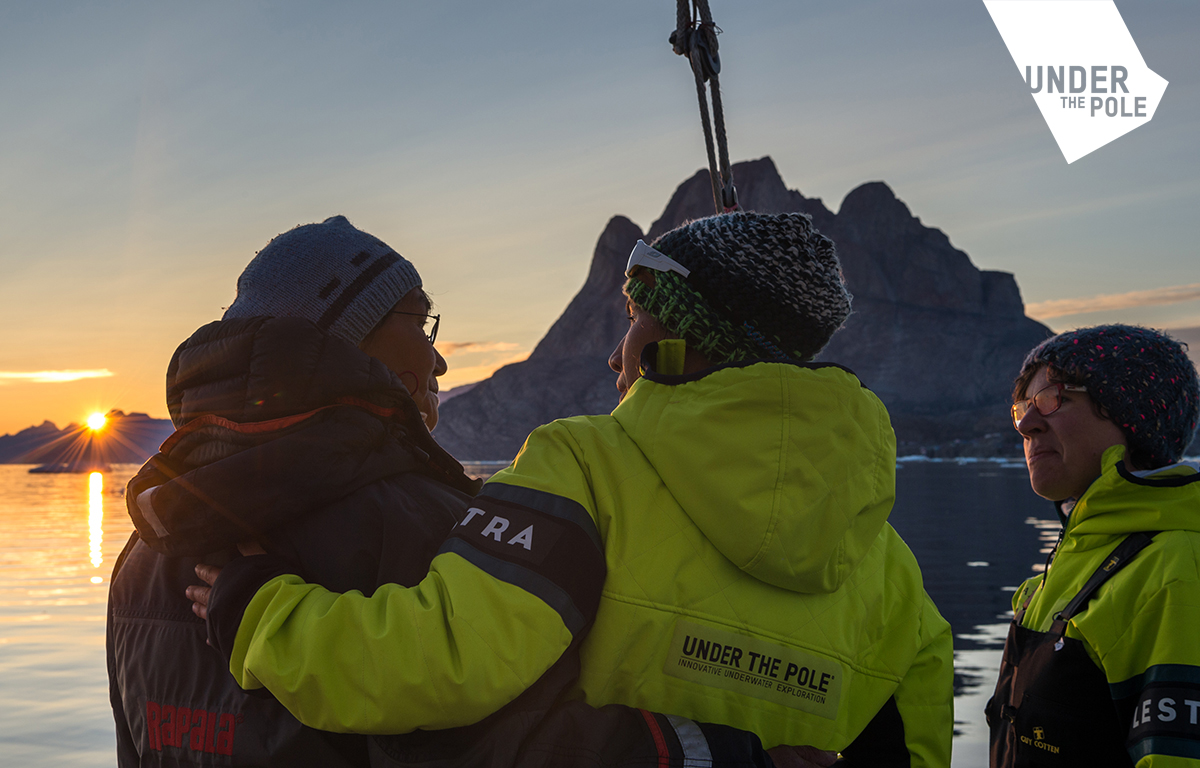 We will also remember our scientific dives, with our blue lights and yellow filters applied on top of our diving masks: a new world revealed itself before our eyes. Every single dive was very special with the excitement of the first-time, every time. Today, we are waiting for the lab analysis, with the secret hope that another GFP will be discovered. GFP is this type of protein that has revolutionised medical science by allowing to monitor the evolution of a virus or cancer cells in the body to enable better treatments. But beyond the research of potential new GFP, Marcel Koken will also be working on figuring out the actual role of fluorescence by the animals, especially in the interspecies communication. 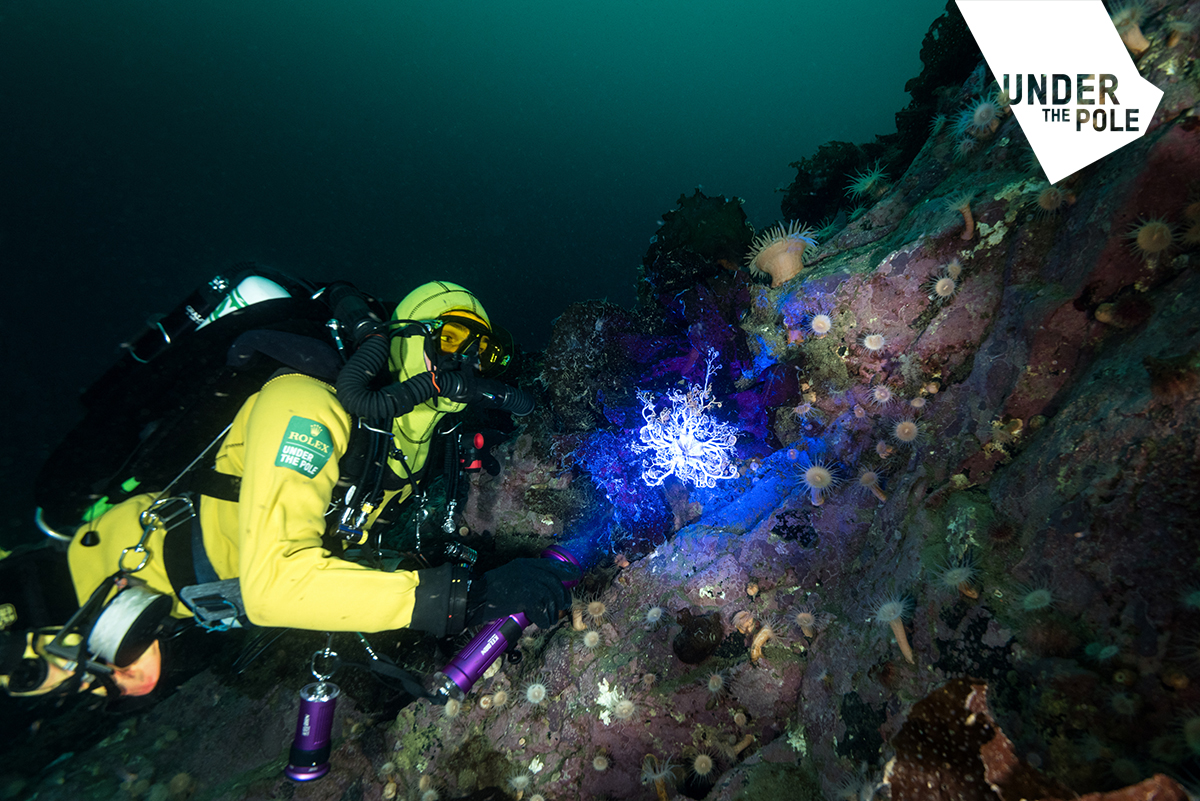 I can’t forget the smile of Cyril Gallut – Researcher for the National Museum of Natural History (Muséum National d’Histoire Naturelle) – after every dive with his nets full of new samples. The species sampled inside a quadrat – a square 50cm wide – would then be sorted and frozen at -80ºC in order to do an inventory of the biodiversity found in this remote and unknown part of the globe. 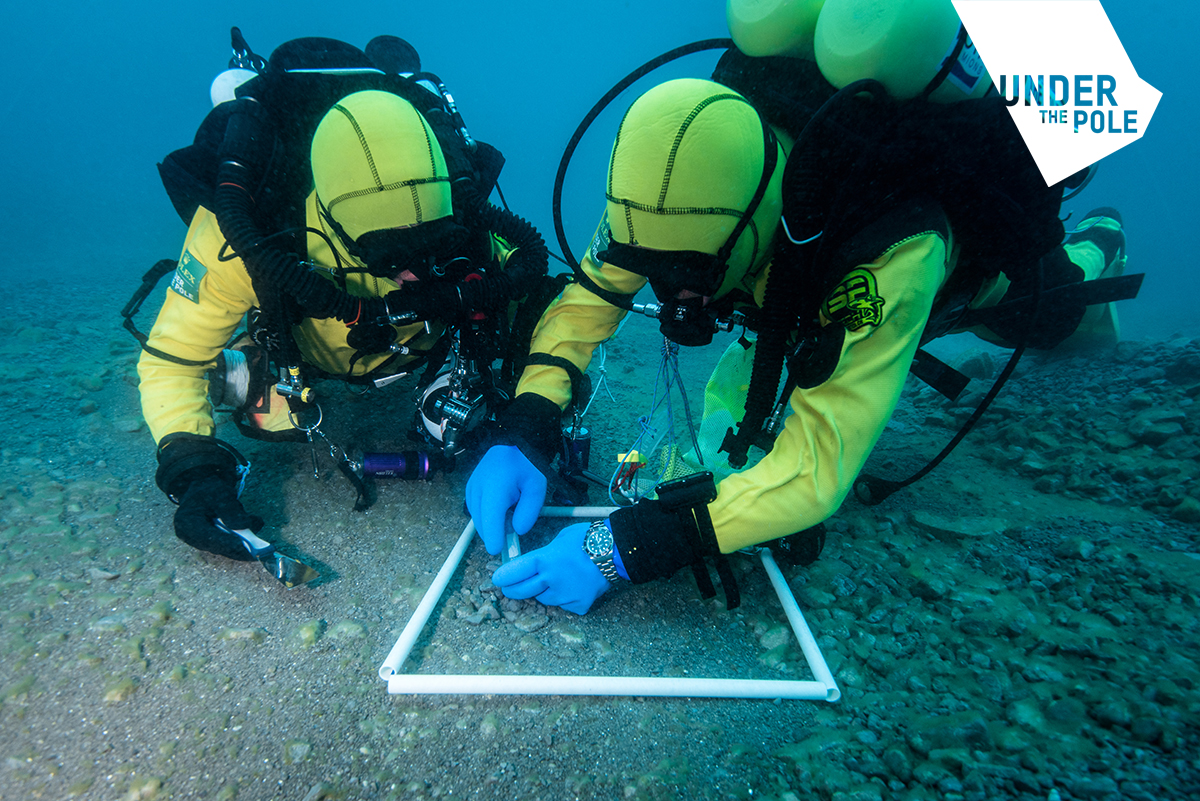 Our arrival in Pond Inlet, Canada in the fog and in the ice was also a memorable moment. The barometer kept dropping, but finally the fog dissipated and revealed the most stunning kind of landscape: black mountains with sharps snowy summits. We sailed our way through to Albert Harbour and we probably did one of the most epic dives we’d ever done in a polar environment.

We cannot forget the reunion with our husky Kayak (for administrative reason, Kayak could only join us in Canada) and Bilou (Roland Jourdain) who was able to share with us the most incredible part of this journey through the northwest passage. For him, it was the first time he ever sailed through the ice, and it was an incredible opportunity for the rest of the team to be able to share a shift with this famous offshore racer!

Beechey Island, where Franklin did his first wintering, and where rescue team were sent to find him was a highlight. To see the ruins of their baracks, they graves, and the remembrance stone that Lady Franklin once sent over there to honour her husband and his crew will leave vivid memories in everyone’s mind. We all felt immersed in the History of the northwest passage. 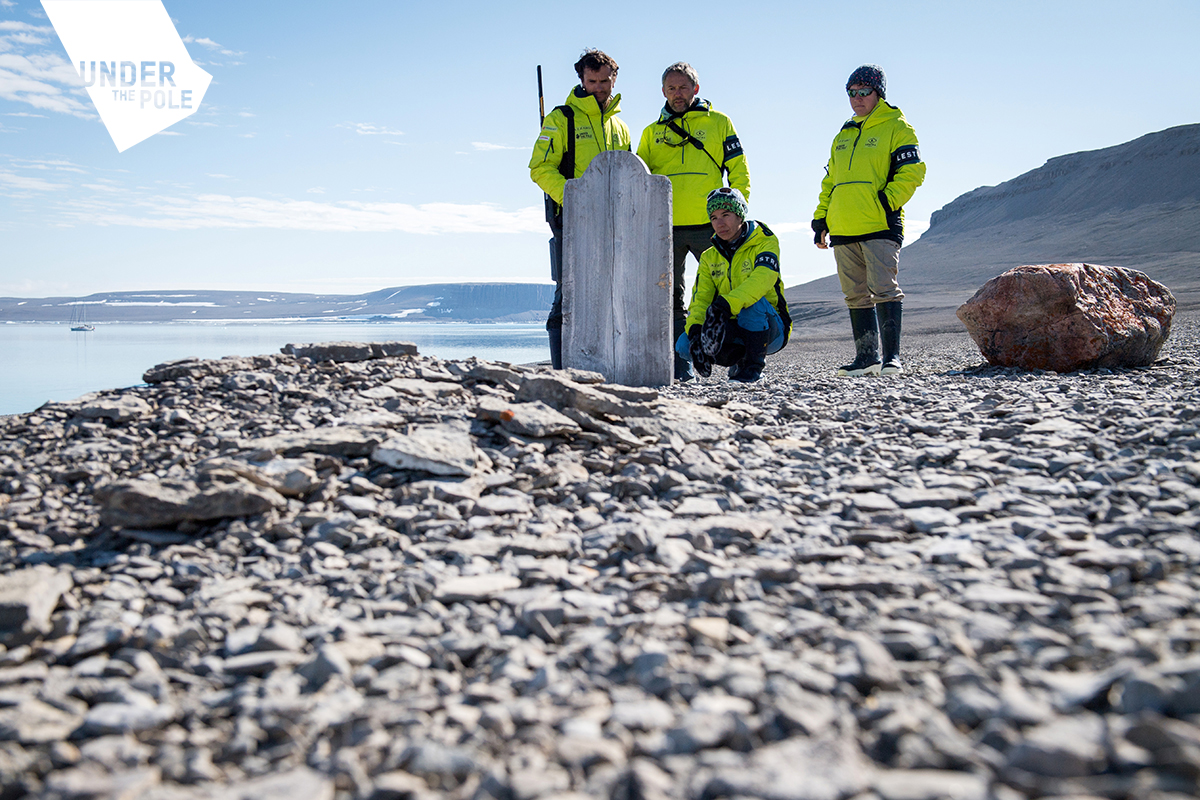 Tom also took his first steps in Resolute Bay, where Ghislain and I embarked for the North Pole for the very first expedition of Under The Pole seven years earlier. We have even been able to see the very DC3 that actually took us to the pole. It brought back some incredible memories of such an extraordinary expedition, it was almost overwhelming. That’s also when we realised how much ground we had covered since that time! 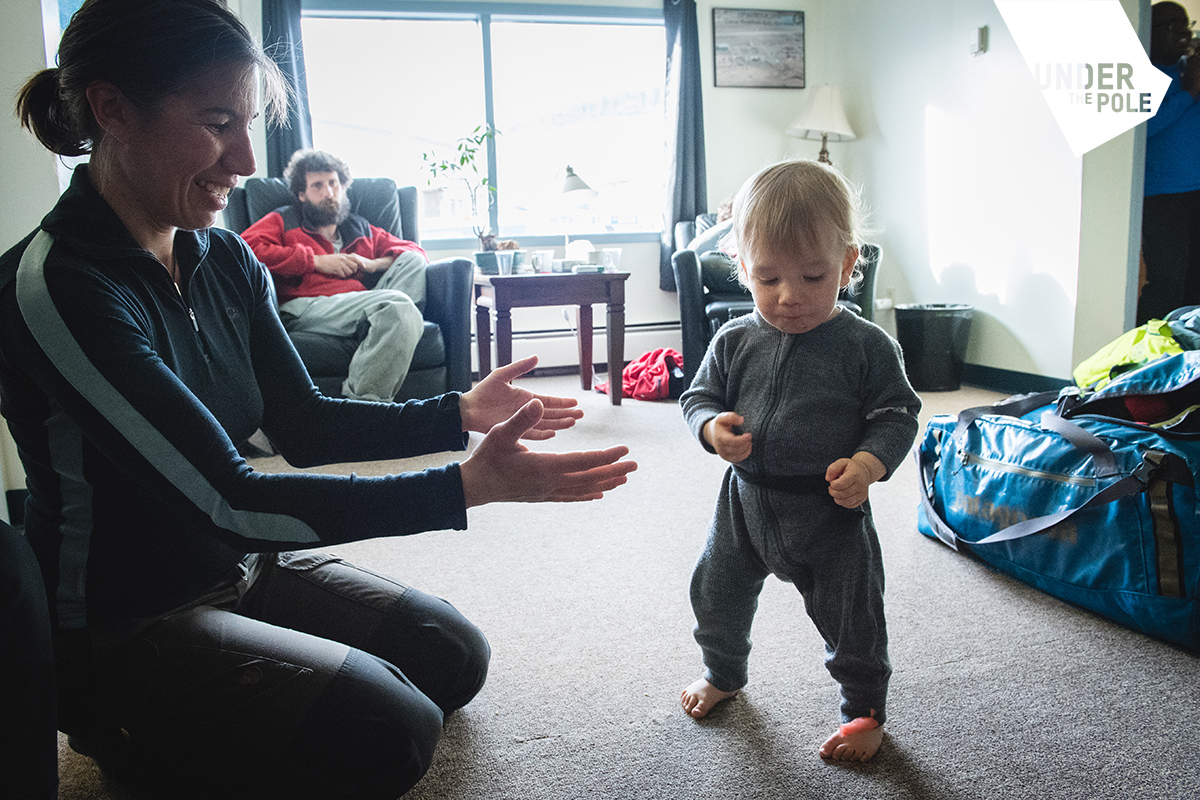 The Peel Sound is where we actually doubted our ability to complete this mission as we got completely trapped in a very thick and compact sea ice. At that point we started contemplating the scary idea of a forced wintering, just like it happened for the explorers of the past century. But it’s also on this isolated corner of the northwest passage, that we encountered the lord of the arctic. Observing polar bears swimming, getting back on the ice, diving again and climbing on the face of a cliff to raid birds nests was an incredible sight. What a joy for all the team to observe this large size male or this female with two cubs, all looking strong and healthy. This year-round icy terrain must make it the perfect environment for them to hunt seals. 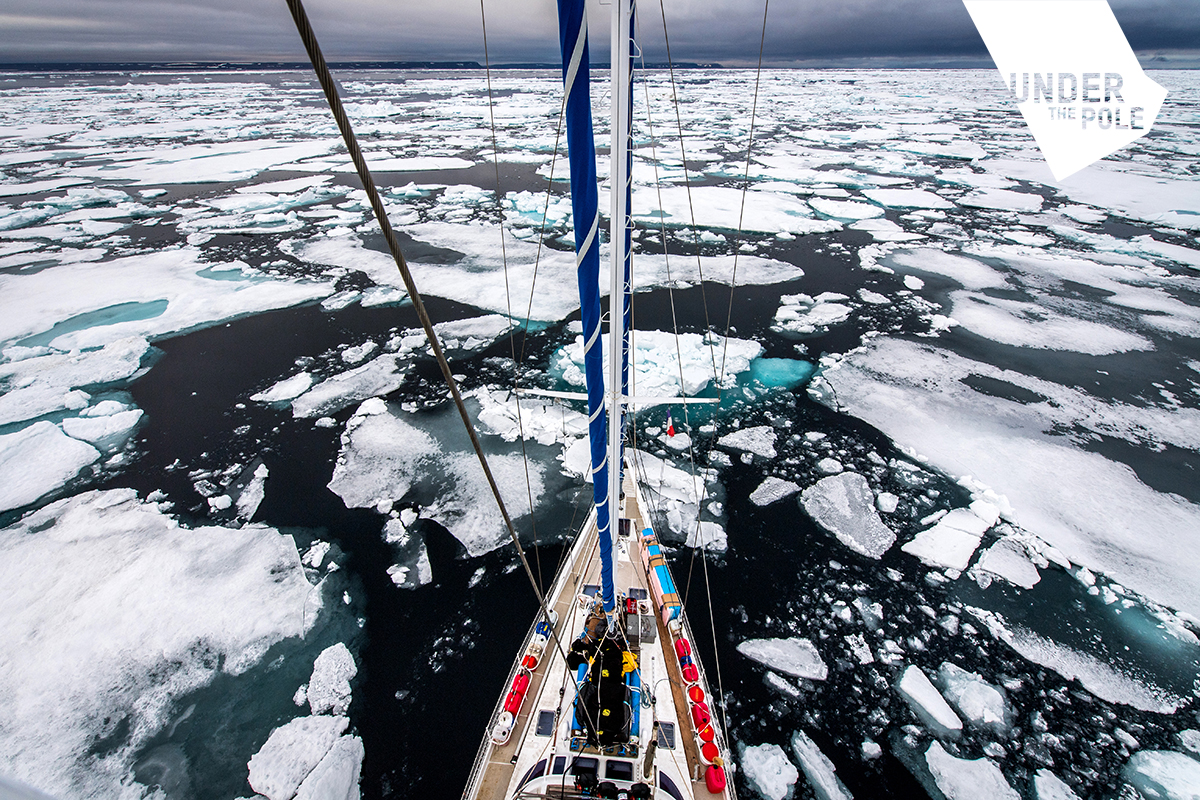 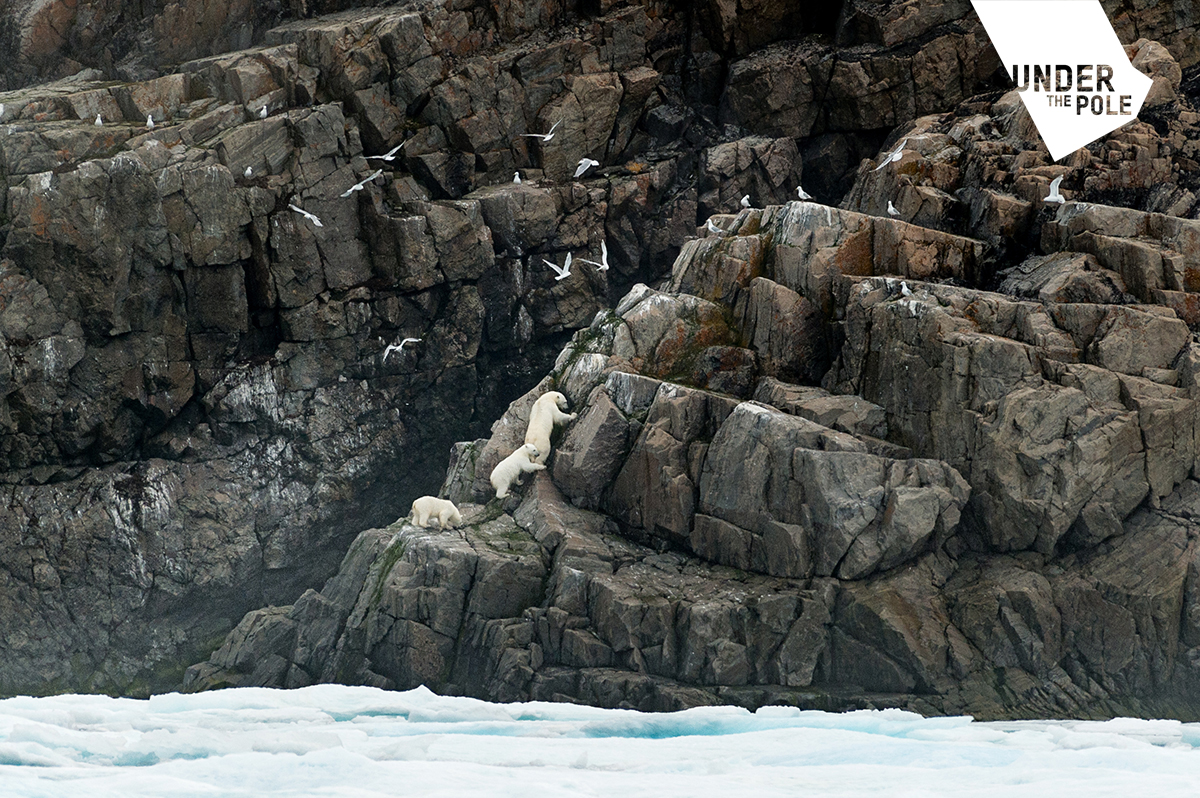 We will all remember finding this unknown wreck as we were initially looking for a shelter from the bad weather. We dived the wreck and as we were observing all the life that had grown on this ship, a curious bearded seal came to observe…us.

As Tom woke me up in the middle of the night, I took him outside on the deck to see his very first northern lights, and then put him back to sleep. I am not sure he will remember this moment, but I certainly will. 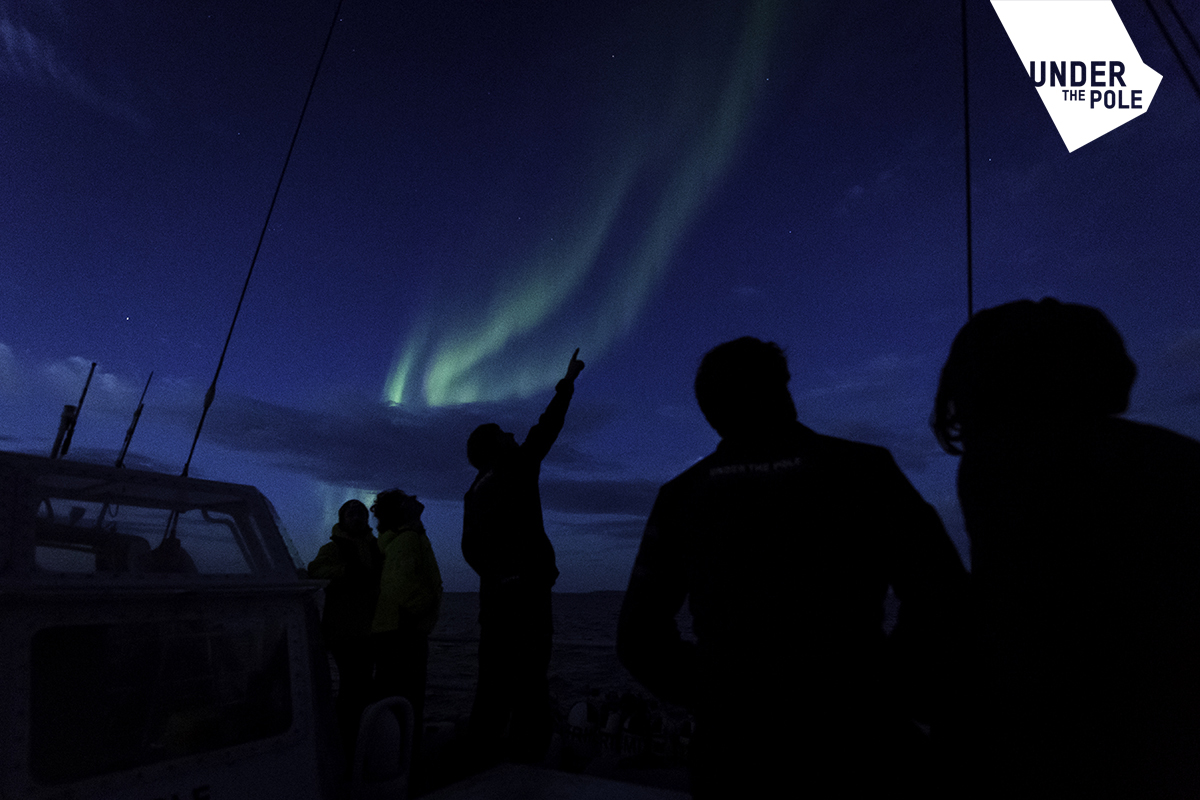 Sailing though the Bering Strait in bad weather and rough seas was unforgettable. Then, appearing through the fog, we discovered some majestic cliffs after weeks of flat land. This meant a lot to the team, as it meant that we indeed had succeeded to cross the northwest passage, safe and sound. The WHY could now surf its way south to the Pacific ocean.

The arrival in Kodiak, the biggest island in Alaska, after which the Kodiak bears were named – the largest bears on earth! Getting there at dawn, surrounded by whales, forests of pine trees and mountains, seeing every square each of land covered in vegatation, or taking a bath in a hot spring looking down at the WHY moored in the middle of breathing whales are all just unforgettable moments we all have engraved in our minds. We felt really privileged to sail alongside so many curious sea otters, to observe sea lions fishing, or to spot grizzly bears feeding on sea-shells together with a fox whilst bold eagles were flying over our heads. 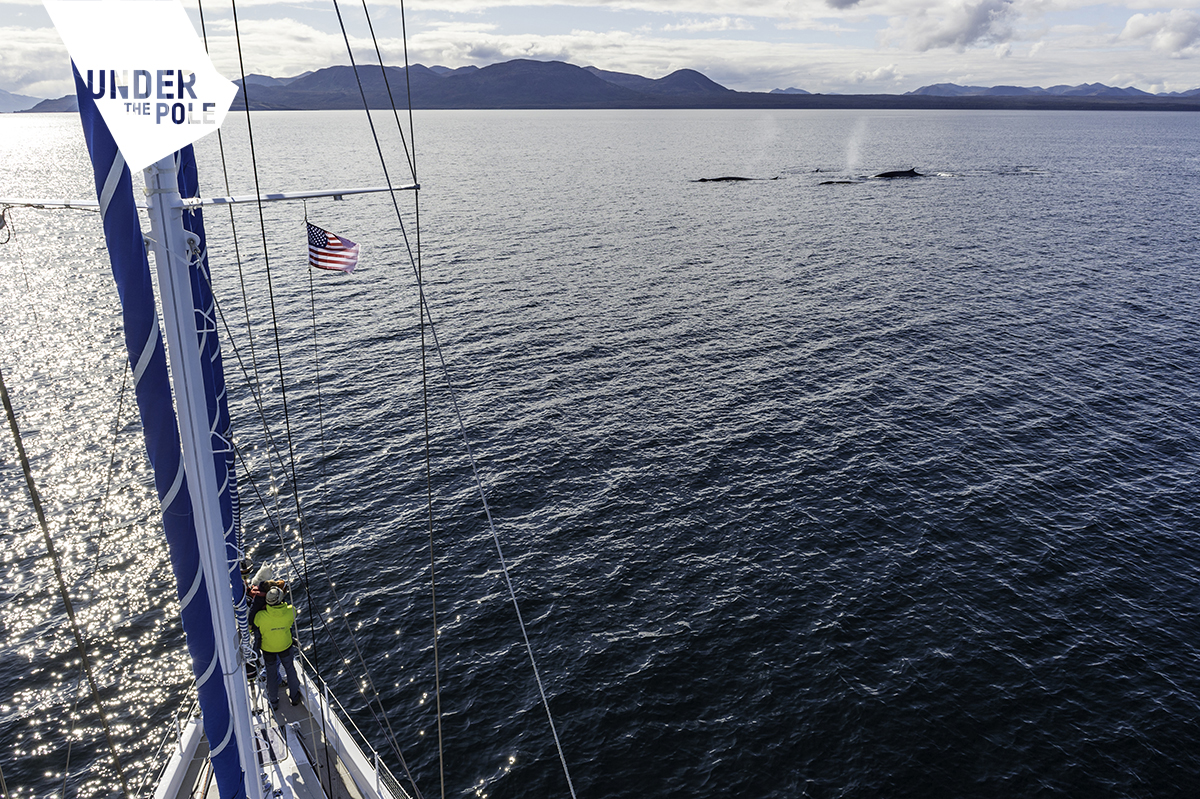 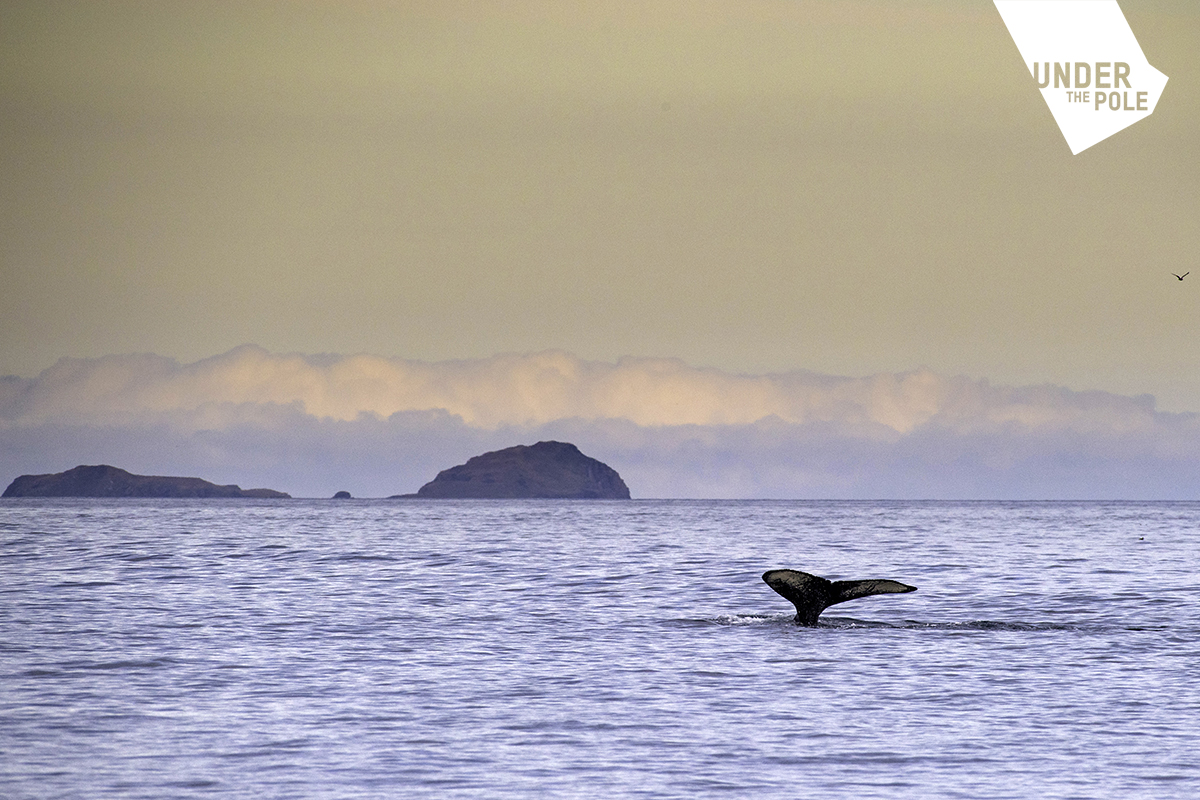 We also saw Robin growing fast and starting building his confidence, getting on top of the 20 meter mast on his own, come down the mast to paint with me and get back to his TGV train drawing. 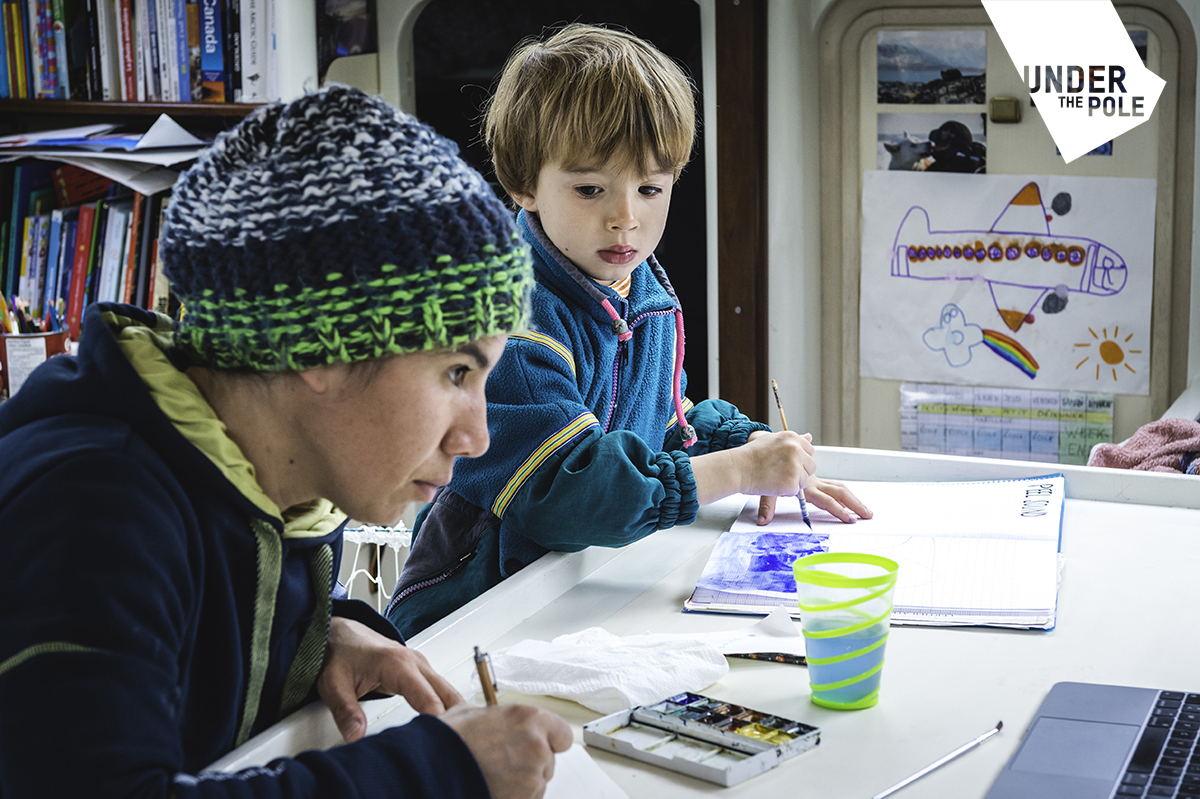 We will all remember the days were everything seems to fall into place, and the tiring days where one hurdle is followed by another one, all day long. But also, we will keep great memories of the parties onboard the WHY and the friends we’ve met along the way.

Four months is a short time and it makes it incredibly intense. We are happy to be back on land but we are already looking forward to setting sails again. The northwest passage remains and will remain a testing route to sail. Communication is extremely difficult as the internet is almost non-existant in this corner of the world. We now have four months ahead of us in France to prepare for the next leg which promises to be a very exciting one, but also to work on all the scientific, video and photographic content created during the last leg.

We want to thank the sponsors of the expedition for their continuous support, especially AZZARO and ROLEX, allowing to make Under The Pole III happen in the best possible conditions, as well as Bordier & Cie, Private Bankers, FRISQUET, HONDA and AIR LIQUIDE FOUNDATION.

Thanks also to our team for the intensity of the work done within such a confined space onboard, and we would also give a big a shout-out to our team back in the office, working in the background for us and always helping us out despite the time difference!

Thanks also to all of you who follow our adventures and who are becoming a part of it by sharing it around !